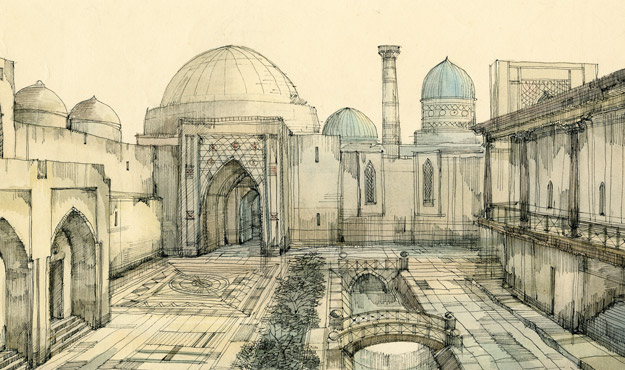 One of the basic responsibilities of the Shias is to earn his satisfaction. Allamah’s life was the perfect embodiment of this responsibility. A glance at the life of Allamah shows that the cause of his elevated status was actually his persistent endeavors to please Hazrat Imam-e-Zamana (a.t.f.s.) through various efforts throughout his life which included spending money in the name of Imam-e-Zamana (a.t.f.s.), organizing gatherings for discussions on him, propagate his name, publishing and distribution of the books which were written on Imam-e-Zamana (a.t.f.s.), also helping the Sayeds and other believers. One of the ways of helping Imam-e-Zamana (a.t.f.s.) is providing assistance and pleasant interaction with the believers. As it is mentioned in Majmaul Bahrain:
“Equality of brothers is their participation and partnership in sustenance and livelihood.”
Allamah remained involved in almost all the stages of lives of people, whether those were mundane issues or serious matters. So much so that he was invariably helpful to everyone which is a source of delight for Hazrat Imam-e-Zamana (a.t.f.s.). Allamah’s generosity was not just limited to his friends and associates, in fact he was also extremely compassionate and magnanimous with the destitute and paupers. Following the example of Imam Zainul Abedin (a.s.), Allamah used to leave home in the dead of night with a heavy bag full of food packets and eatables on his shoulder. Allamah distributed the food among the needy and starving, with overwhelming grace and affection.
The stint at Mecca As per the instructions from Hazrat Imam-e-Zamana (a.t.f.s.), Allamah stayed in Mecca for two years. Allamah had chosen to live in dissimulation and imparted lessons to students of all four Sunni schools of jurisprudence. Allamah was so proficient in all four schools of jurisprudence that everyone presumed that he belonged to their creed. In the meanwhile, he fulfilled all his responsibilities assigned to him by Imam-e-Zamana (a.t.f.s.).
According to scholars in these two years, Allamah also stipulated the essential tenets and precepts of Hajj.
The primary reason for being the main executive of Imam-e-Zamana’s (a.t.f.s.) assignments and significant tasks was the spiritual purity of Allamah.
Allamah Sayed Mohsin Ameen (r.a.) writes:
“During Allamah’s stint at Mecca, he managed to manifest numerous signs (which had remained concealed until then). It is due to this reason that the pilgrims could easily perform the Hajj as per the directives of the Ahle Bait (a.s.), which otherwise was not possible.
These signs have survived even after the death of Allamah and they immensely benefit the people. For instance Allamah promulgated the limit for Mawaqeet and Ehraam as also rituals for Muzdalfa. These spots were until then undiscovered, which were made public by Allamah.
(Imam-e-Zamana (a.t.f.s.) and Allamah Sayed Mahdi Bahrul Uloom (r.a.), pg. 106 by Sayed Jaafar Rafi’ee)
Thus those Hajj rituals and obligations which we perform today were actually facilitated by Allamah. This also clearly indicates that in the era of the major Occultation, Imam (a.s.) guides us in the similar manner as other Imams (a.s.) had done during their tenure.
Some more anecdotes of meeting with Imam (a.s.)
Meeting in the Cellar Janab Muhaddise Noori (r.a.) writes that the reliable researcher and scholar, Sayed Ali, the author of Burhaane Qaate was actually the paternal grandson of Allamah’s daughter. Sayed Ali has related from Sayed Murtuza, who was the son of Allamah’s sister:
“I and Allamah had left together for the Ziarat of Saamarra. Allamah used to sleep alone in his tent, while my tent was adjacent to his, which made it easier for me to spend days and nights in the company of Allamah. Those were the days when people used to gather around Allamah and spend hours with him. At times, the discussions continued until late night.